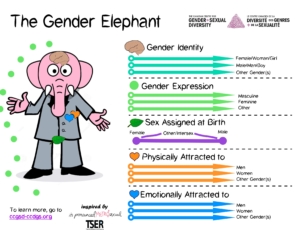 What’s the difference between “sex” and “gender”?

Sex is based on biological characteristics used to label people as male, female or intersex such as: X and Y chromosomes, internal and external sex organs, hormonal levels, and things like hair and breast.

Sexual and romantic/emotional orientation is who one is sexually or romantically/emotionally attracted to. How you identify who you are attracted to can be from a variety of factors including but not limited to gender identity, gender expression, and sex assigned at birth. For example you may identify as pansexual meaning that you have attraction to all genders (men, women and non-binary), cis, and trans.

Gender is how you identify and choose to present yourself in society. You could identify as woman/female, man/male, neither, both, another gender(s) or your gender may be fluid and can change throughout your life. For transgender people, their assigned sex at birth is not the same as their own internal sense of gender identity so most transgender people seek to express their gender to match their gender identity by being selective of their clothing, hairstyle, voice, body, shape, etc.

It doesn’t matter about whether you were born with a penis or vagina however, your race, culture, age, ability and even personality can influence your thoughts about your gender.

*Use the Gender Elephant diagram to map where you are on the spectrum.

Coming out
Scroll to top

This information resource proudly created by